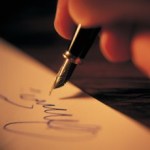 I recently sent out a short story to several writing friends and the biggest criticism I got back was that I used the wrong POV (point of view). That the story would work better if told in 1st person. Which filled me with instant dread and revulsion. I ALWAYS write my stories in a variant of 3rd. It’s something I don’t even think about anymore, it’s done automatically. I never consider writing in 1st person.

I had to give an uncomfortable laugh because it struck at an old, old writing injury. “I once had an English professor tell me that my 1st person was terrible. So I never wrote in 1st person again.”

“Pardon my language, but FUCK that professor.” Now mind you, that was the exact reaction by TWO different friends at TWO different times. Perhaps, 15 years later after that fateful moment in college, I needed to evaluate that writing scar I had buried so deep inside that I had forgotten I carried it.

So I dug up the mortifying incident from my memory and re-analyzed it. I actually still have that paper with me. I read parts of it. Sure most of it is crap but the parts that the professor had problems with? The parts with 1st person where she said the narrator was too self aware? Holy crap! It reads like any other Urban Fantasy book on the market now! What the….?? You mean I have been carrying this scar around for nothing?

Now I face the task of writing this short story over but in the 1st person. Even with the realization that I have learned so much about writing over the 15 years since college (on my own) and I am nowhere near that girl I once was, I still sit down with that damn niggling fear that ‘the narrator is too self aware’ and ‘that doesn’t sound believable at all’.

For this, all I can say is that I am so thankful that I have the best encouraging writer friends… and no more professors.